For many years, David and I have talked about the politics of food with his parents. Before this year, those conversations have gone nowhere. Usually, they just humor us as we buy whole wheat bread and organic milk when we visit them. They nod mindlessly as we drone on about sustainable local, seasonal, or organic “real” food. Those kids! Once the discussion erupted into the closest thing to an argument I have had with them in all the time I have loved their son.

Both of David's parents grew up in post-WWII New York City immigrant communities. Although food was an incredibly important part of Jewish culture and even Jewish religion, the people in their community had relatively little direct connection with the actual growing of the food they ate. Both my MIL and FIL were instilled with beliefs in Americanization, in progress, and in a post-rural economy. They are loyal and trusting people who believe deeply in justice—but I think they have trouble believing that anything that looks to the future could possibly be wrong, that anything that is a convenience or a small luxury could possibly be bad for them or the world.

I first met Jay when he was in the ICU after a heart attack. (Interestingly, the day I was supposed to meet David’s parents was two months earlier--the day I was admitted for my brain surgery.) He is a diabetic who has lost much of his sight and had other complications from the disease as well. Sue--the recipient of some of my finest knitting (like this silk lace shawl, and this beaded one, and this lightly multicolored one) because of her petite size--carefully watches her weight and her family member’s weights. Recently, she has some recurring heart issues--and had a somewhat high blood sugar reading at her last appointment as well. Eating a healthy diet is something extremely important to her—although she approaches healthy eating with a shopping cart full of iceberg lettuce, margarine, low-fat American cheese, artificial sweeteners, and diet sodas. Her sweet tooth doesn’t always make it easy to avoid the highly processed goodies she can find in the local grocery stores here in south Florida (like chocolate babka and rugelach, or that fat-free/sugar-free chocolate that tastes like Styrofoam to me).

When the movie Food, Inc.

came out this year, we wondered if this might be the perfect way to bring up these issues again. But after much thought and discussion, we decided not to mention it this year. Yes, we’d buy our own milk and the like, but this time we wouldn’t say a word about their choices. They've suffered through that discussion quite enough. At some point, we recognized that our connection with them had to lead us to at least try to respect their food decisions.

But then Sue surprised us by describing a show she had watched on Ellen Degeneris. What she could remember is that it was a young man with a new baby who talked about how industry is doing bad things to food and that we need to use our dollars to support what we believed in. She was excited to pass this information on to us. After searching on Ellen's site, I think the interview she saw might have been with Jonathan Safran Foer, author of Eating Animals.

You can watch the clip over at Ellen's site.

I was thrilled--and immediately started thinking that perhaps this was the right time to do a little proselytizing after all!

We started telling them about Michael Pollen's The Omnivore's Dilemma,

his next book In Defense of Food,

As we were talking, Jay picked up the phone and dialed the number of the service that provides audio books for the blind to him at his request.  He ordered all three. If after listening to these he is still itching for more, I think I'll recommend Fast Food Nation

to him.  It was the book that really pushed us into this issue when it first came out.

Jay commented to Sue that it would be hard for them to listen to the books together because of the way the technology works. So we also bought paper copies of In Defense of Food

for Sue to read in print. When she finishes those two, if she wants more I might give her the new young reader's adaptation of The Omnivore's Dilemma

which my son has enjoyed.  I’ve also heard about the guidebook that accompanies the Food Inc.

(Anyone know if any good?  I think I'll have to go check it out.)

After seeing their interest, we started to reconsider showing Food Inc.  It is currently available for instant watch on Netflix, so we pulled it up on their large-screen computer and gathered our chairs around.

After watching the film, we sat at the kitchen table and talked a bit. Sue was very moved by the film and interested in making changes, but she was at a loss as to how to go about it. “Are there still any farms around here?” she asked—a good question since gated retirement communities (including their own) are replacing farms everywhere you look.

Immediately I popped on Local Harvest and found the address of the farmer’s market nearby, a farm stand, and even a CSA. I don’t think they are quite ready for a CSA since they are not yet serious fresh vegetable eaters and Jay is pretty picky about what vegetables he’ll even taste. (Serving broccoli and asparagus to him will illicit cries of “Are you trying to poison me?!”) Nevertheless, I do think finding places where they could make their own choices might work.

The south Florida growing season is during the winter, so the markets are open and full of abundance right now: 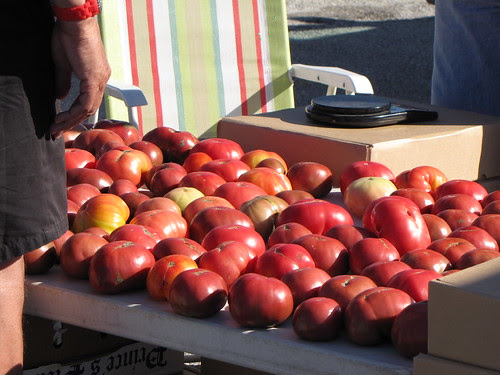 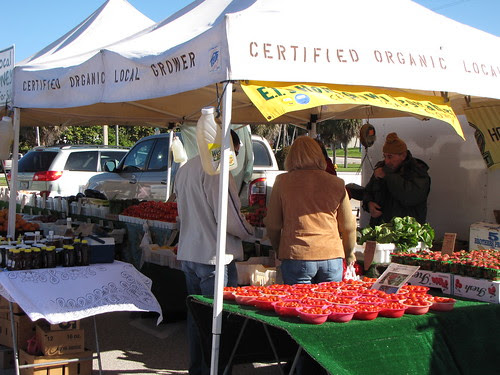 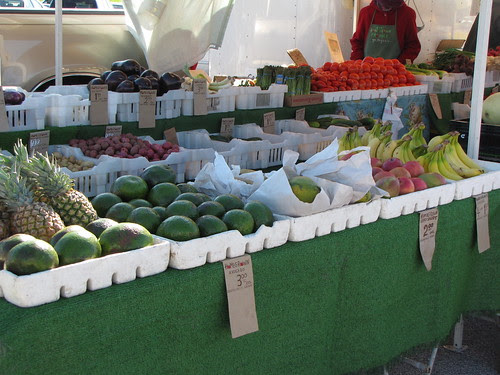 As a DC gal, I'm blown away by their "homegrown" labels on things like mangos, avocados, and bananas! 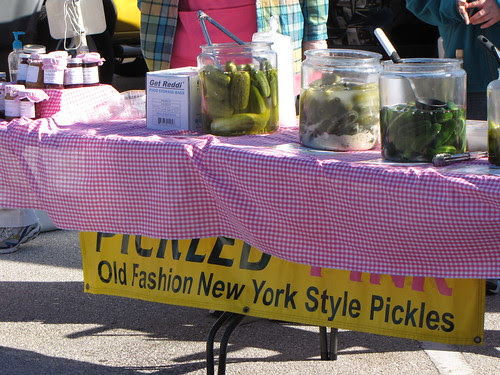 For New York transplants, these pickles are a welcome sight.

David knows it won’t be easy for his parents to break habits they have had for decades. And we’ll be miles away from them as they navigate this new terrain, unable to offer regular shopping support. We tried to think of a few first steps to help them out.

1. Buy organic milk when you go to the grocery store.

2. Commit to going to the farmer’s market or a farmstand at least every two weeks. Plan to spend at least $20 of your food budget on foods you can buy from a local grower.

Do y’all have any other suggestions for those just getting started on this path?
Posted by Hannah

As another south Florida person I am always ecstatic to see homegrown vegetables in winter. I'm a transplant from Texas.

The best time of year for avocados are a few weeks in July. Same for mangoes. You can get awesome exotic fruits down in the Homestead area like lychee and longan.

Good luck with your family!

Oh, the organic milk thing: my parents buy it because it lasts longer and doesn't spoil as fast. Maybe use that as a temptation.

Yep--that is exactly what my in-laws said about the milk! A friend of theirs buys organic milk because it lasts longer. I assumed this was because she was buying ultra-pasteurized organic. But perhaps this is not it. Do you think organic itself makes it last longer? I didn't know that!

We drink raw milk from a local farm and used to be astonished at how long it lasted--and how useful it was even after it soured, unlike pasteurized milk.

Michael Pollan was on with Jon Stewart last night. I love rule # 1 (which he's said before, of course) : EAT FOOD!

This might be a helpful tip for someone trying to eat more local foods- I always go to the farmer's market before going to the regular grocery store. I guess it depends if they do their shopping once a week or what... but for me, it makes it so I can plan the rest of my meals around the fresh stuff from the market instead of ending up with a pile of fresh produce and nothing to go with it.

as a child I hated vegetables...
as an adult, i learned i really just hated a few (but my mother only served these few!) vegetables, and that i hated overcooked vegetable.

It is hard to break a lifetimes habits.. (and conceptions of what you like and don't like!) but you can ask them to try.

tell the to WASTE a $ or 2 and try some vegetable that they think they hate.. (and to cook it differently)

they might still hate it. (and waste some money)
or they may find, that fresh, (not canned or frozen) and cooked (or undercooked!) differently, they like the vegetable.

Its OK to still hate (in my case, green beans) because i know i like
avacoda, artichoke, beets, cabbage, ...parsnips, squash, peppers, chilis, RAW (not cooked to mush!) brocolli, and lots of other veggies--many of them i never tasted as a child.

Plant something--anything--even just a pot of basil or mint in the kitchen window. Having even one thing on the table that you personally grew makes it easier to remember what food is.

I agree that a CSA box would be overwhelming if they're not vegetable fans. But if there's a friendly local-foods cafe nearby, maybe a gift certificate would be a nice encouragement--and it would help a worthwhile small business too.

PS-- I'll think of you this afternoon at the sunny Farmer's Market in Manhattan Beach--two blocks up the hill from the Pacific Ocean, and next to the public library. No pickles, though. ;D (Oh wait, does kimchee count? There's usually a tent with various kinds of kimchee.)

We talked to Sue about planting a few herbs on their sunny screened-in porch. She's a little unsure about how to cook with them, but she seemed fairly interested. And the local farmer's market even sells starts!

And I completely agree with you, OfTroy, about eating veggies. It all comes down to preparation, just a wee bit of adventurousness, and habit. Fresh makes all the difference!

Aren’t humans amazing Animals? They kill wildlife - birds, deer, all kinds of cats, coyotes, beavers, groundhogs, mice and foxes by the million in order to protect their domestic animals and their feed.

Then they kill domestic animals by the billion and eat them. This in turn kills people by the million, because eating all those animals leads to degenerative - and fatal - - health conditions like heart disease, stroke, kidney disease, and cancer.

So then humans spend billions of dollars torturing and killing millions of more animals to look for cures for these diseases.

Elsewhere, millions of other human beings are being killed by hunger and malnutrition because food they could eat is being used to fatten domestic animals.

Meanwhile, few people recognize the absurdity of humans, who kill so easily and violently, and once a year send out cards praying for "Peace on Earth."

Check out this informative and inspiring video on why people choose vegan: http://veganvideo.org/

This is truly inspiring. Barbara Kingsolver will be presenting writers' workshops at the San Miguel Writers Conference in San Miguel de Allende, Mexico February 19-23 2010. I just signed up. It looks like a rare opportunity to meet her. Are you going?

Brook--I am so envious! I love Kingsolver's writing in general. Periodically I think about going to her house and camping on her doorstep, but I've never met her. Getting to work with her sounds fabulous!

Beautiful veggies!
Can't wait to see what you make for the CanJam!

Those pictures of the produce available in South Florida are taunting my North Carolina sweet potatoes and kale...

This is an inspiring story. Thanks for sharing!