"Returning violence for violence multiplies violence, adding deeper darkness to a night already devoid of stars... Hate cannot drive out hate: only love can do that."
--Martin Luther King

"What difference does it make to the dead, the orphans and the homeless, whether the mad destruction is wrought under the name of totalitarianism or the holy name of liberty or democracy?"
--Mahatma Gandhi

During the 1950s and 1960s, my parents were involved in the Civil Rights Movement in the town where they were then living. I grew up hearing stories about my father passing out candy bars to protesting African Americans sitting down at the segregated lunch counter at the drugstore. For this, his graduate school took away his fellowship.

I also heard stories of my father's father and his critiques of the Ku Klux Klan. He believed they were cowardly for hiding their faces when they should be proud of what they believed and fought for.

What a long way my father came from how he grew up.

I grew up with images of people wearing their Sunday best, proud and strong, marching peacefully to express their refusal to accept segregation--and images of those same people being sprayed to the ground by fire hoses strong enough to peel bark off trees. The hoses were held by police officers. Whenever people told me that policemen were our friends, I cringed.

I sang with my parents on every long car trip, learning the words to many many freedom songs, including a few turned-around verses written by the few liberal white southerners in the movement: "If you miss me at the front of the bus, I'll be sitting in the back...."

Yesterday we watched as our community celebrated Martin Luther King day in the way that seems to be becoming the traditional commemoration in the United States: rather than a day committed to justice and nonviolence (which one might expect and want), it is a day of service (which seems less edgy or dangerous, I suppose).

The service projects in the DC area that accepted children as volunteers all seemed to be more about making the kids feel connected and enjoy their experiences than actually get anything substantial done. We went to a Day of Service fair that sometimes just felt like a make-crafts-with-plastic-crap festival. In my cynical mood, I walked around the noisy hotel ballroom, frustrated that the charities represented there were not even allowed to have posters explaining the point of their organizations. Making dice out of recycled boxes or making decorations for a party to thank donors to the Republican party basically cannot help me memorialize Martin Luther King.

And then, as usual, fiber stopped me in my tracks.

Using the idea of the prayer shawl ministry where volunteers knit shawls for people in need of comfort and prayers, the local hospice program decided to have volunteers decorate fleece shawls to offer to the hospice patients and to their family members "to wrap them in the comfort hospice can provide." I sat down with polar fleece, scissors, Red Heart yarn, and a needle barely sharp enough to pierce the fabric--and started to cry. After I made mine, Son came to start one as well: 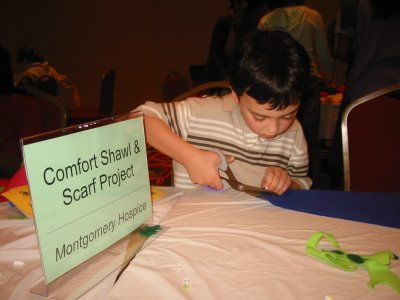 Some people made really elaborate scarves:

I then made a flower from tissue paper for the a local shelter for abused and homeless women including those with families. The flowers would be used by the children there to help them prepare corsages for Mother's Day. Can you imagine what it must be like to be spending your first Mother's Day in a shelter because you were a brave enough and strong enough mother to take yourself and your children away from a batterer? 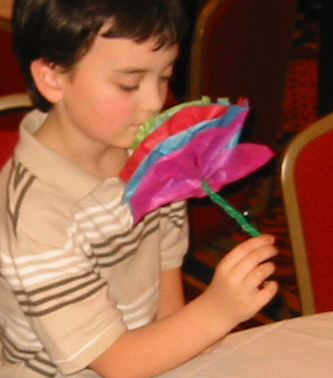 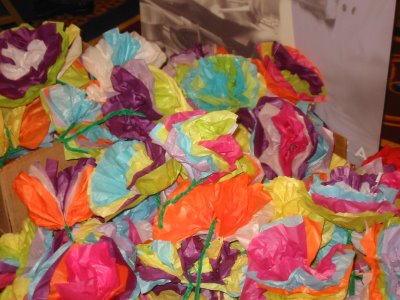 Do the fleece-and-sequins-and-glue shawls or the tissue paper flowers really do any good in the world? Perhaps not. But despite my reluctance, the process of making them DOES do a lot of good in the world. Making those of us with plenty feel connected to the incredibly deep needs of others may be more important than anything we could actually do for people in need in just an hour or so. It is not their lives we change but our own. (And of course, most of us are both "us" and "them" at various points in our lives.)

And now I am off to finish a scarf for Food and Friends, cast on a scarf for the Orphan Foundation's Red Scarf Project, and finish plans to put together with my family an afghan for Afghans for Afghans. Anybody want to join me?

After we left the hotel ballroom, we stopped by our favorite movie rental place to pick up an episode or two of Eyes on the Prize, the phenomenal documentary about the Civil Rights Movement. The video store did not have it (and I've now put it on hold at the library) so we went back to one of MLK's roots and checked out Gandhi. Although I know it would be made differently now and has some factual problems as well, we were all overwhelmed with the power of the movie.

The two moral centers of my personal universe are honesty and pacifism--although I constantly fail at my efforts to be an honest person who never relies on violence--even verbal violence--to win my way. (Perhaps the fact that these are weaknesses is why I am so committed to the ideals?) I completely realize that people's ethical commitments can vary tremendously and even completely conflict with each other, and both people can still be very ethical people. So please, if you don't share my pacifist beliefs, understand that I realize that this is my own path and not necessarily that of my readers.

I believe that force can never win true and lasting change. I believe that violence cannot create a world based on respect and peace.

Nonviolence is not just an ethical practice. It is a successful strategy. Ghandi talked a great deal about how the nonviolent soldier had to be just as committed to engagement and just as prepared to lay down his or her life for the cause as any military soldier would be. Instead of accepting domination, fight by refusing it, both in small ways and large, symbolic ways and tangible ones.

Gandhi, resisting the dominance of the British markets, encouraged Indians to reconnect to skills that could insure their independence. When the empire required that salt be bought from Britain, Gandhi marched to the sea and made salt. When the empire required that cloth be bought from Britain, Gandhi mobilized an entire country to spin their own thread and weave and wear homespun garments. (Ah yes, it all comes back to the fiber arts.)

When faced with violence, don't turn back. Violence shows the weakness of those we fight against. When you do nothing but vigorously challenge oppression, the person hitting you may be able to see your humanity. If he or she does not, at least the people across the world learning of the story will be able to understand your side. Yes, there will be pain and death--but will there be more pain and death than there would be in military battle? And will change come about because of force, change that cannot last, or will justice come because we finally see the greater humanity that links us all?

Imagine a world committed to both justice and nonviolence. What if we had that in the US? Can you even think what the War on Terror would mean if that was our starting point? What if Palestinians and Israelis had moral leaders like Gandhi or MLK?

May we never loose the ability to see such a world.
Posted by Hannah

Thanks for this reminder.

Derrick Jensen has (yet another) powerful and thought-provoking column in this month's Orion magazine in which he challenges his readers to find what they love and do whatever it takes to make the world a better place. One of the main points of his article is that we all must act. He challenges us to become activists with commitment-like those who built and ran the Underground railroad. He challenges us to do whatever it takes. He notes, however, that if "you beleive that 'whatever it takes' is code language for violence, you're revealing nothing more than your own belief that nonviolence is ineffective."

Perhaps another lesson for today is that we cannot wait for MLK-like leaders, but must become the leaders we need.

I liked Jensen's article--but I disagree with him on that quote. I think violence is ineffective in the long run and that nonviolence can be effective--but I still think "whatever it takes" is code language for violence. The reason why the phrase implies violence is merely because of its historical usage, not its truth.