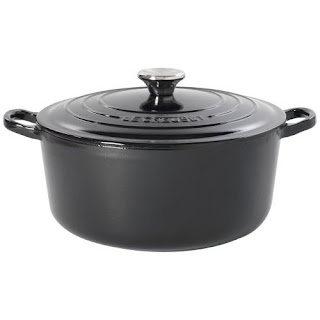 One of the presents I received for the holidays was a beautiful 4.5 quart enameled cast iron Le Creuset French Oven

(usually called a Dutch Oven in this part of the world).

As a big fan of both non-enameled cast iron skillets and slow cookers, I had a feeling that this would be a pot I would love.  And I certainly do: the "French Oven" holds heat tremendously well, it is naturally nonstick (more or less), and it looks absolutely beautiful sitting on the stove or on the table.

Some people love all the bright colors that Le Creuset comes in--but as a confirmed plain-jane, I'm ecstatic about onyx (pure black) and dune (off-white).

In these cold days and in our cold house, stews and braises feel just perfect. I scoured the library for cookbooks and found several--and know I can adjust slow cooker recipes as well. I'm looking forward to more experiments with this pot.

which uses a technique very different from slow braising. Instead, you layer raw ingredients into the pot, cover, and cook in a very hot oven for forty-five minutes or so.

The technique, which author Elizabeth Yarnell calls the infusion method, is incredibly convenient. All the cook needs to do is chop the ingredients, layer them in the pot, insert the pot in the oven, and head to the couch with a glass of wine and some good company to await the glorious smells which will soon emerge from the kitchen.

The recipes in Yarnell's book are all fairly vegetable-heavy.  As a confirmed veggie fanatic who loves to cook but hates to clean up, I thought I might have found a perfect match with this book.

After cooking a few dishes, though, I am only partly convinced.

While the meals are easy to put together, easy to clean up, and in general quite healthy, they sometimes are a bit pedestrian in their flavors. Although Yarnell takes inspiration from a variety of ethnic cuisines, the recipes are all substantially Americanized--or perhaps "Mid-Westernized" would be more accurate.  Fine--I can spice things up to my own tastes. And pedestrian is just fine for most of our weeknight meals, anyway.

The larger problem for me is that the individual ingredients don't always need the same amount of cooking time, even though by definition that is what they get in this cooking method. Last night's meal (Argentinian Beef) featured both mildly crunchy rice and somewhat limp broccoli.  Perhaps the special South Carolina-grown rice I used had too much bite for this cooking method?  I plan to do a bit more experimenting to see what will work.

One of the things I do like about the cookbook is that while it offers plenty of recipes, it also emphasizes the wide range of possibilities this method makes available to a cook adventurous enough to try out his or her own combinations.  The author actively encourages the reader to imagine new possibilities.  What if I were to skip the rice and add a few root veggies instead?  What if I were to replace the broccoli with mustard greens?  In fact, for tonight's meal, we'll be replacing chicken with some tempeh we've had in our freezer for much too long.

On a cold day, a hot stew coming out of the dutch oven can be just the thing to make us warm.  But having stew after stew, night after night, can get old.  Yarnells's Glorious One-Pot Meals

are recipes that are not simply more stews. Although the ingredients are all cooked together, they in general remain quite distinct.  This makes for a nice variation from usual Dutch Oven recipes.

Another thing I really like about the cookbook is that the recipes are written for just two people.  For our family of three, I usually double the recipes (which the author encourages) and pack leftovers for lunch the next day.  But cooking a single recipe--and augmenting with salad or soup or dessert if we need to--might make a lot of sense for us sometimes.

So, in summary: although I do have some reservations about this cookbook, it seems like it will add ease and variety to our basic no-time-to-think weeknight meals.  We'll probably use some of the recipes for nights when we do have time, too.  But I don't foresee this being a go-to cookbook for special meals with company.

Have any of you tried out this book?  Do you have other favorite cookbooks or recipes for the Dutch Oven?
Posted by Hannah