The morning begins with Sock and Icarus cuddling in bed. 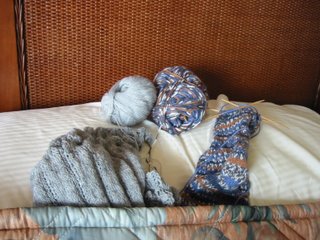 After waking to the sun streaming in their windows, the couple head to the balcony to enjoy breakfast and an ocean view. 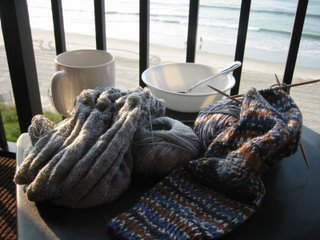 Right after breaskfast, Sock and Icarus head down to the pool for a little sun. 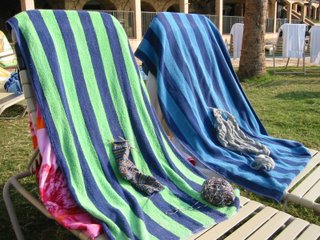 After Icarus heads to the hospital to visit Grandfather, Sock stays to sun himself some more... 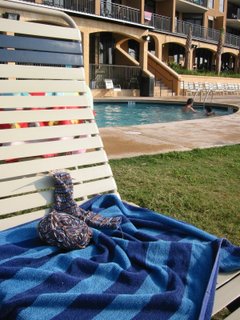 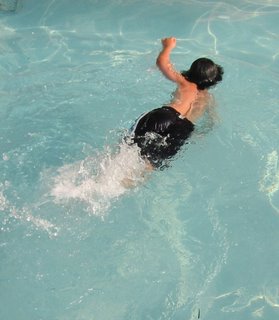 He decides to stick his toe in. 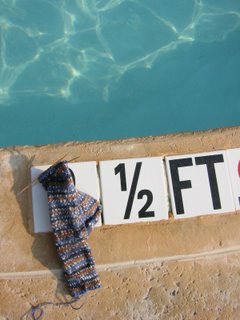 Sock is offended! He is really a bit more than half a foot.

Soon he is even more confused: 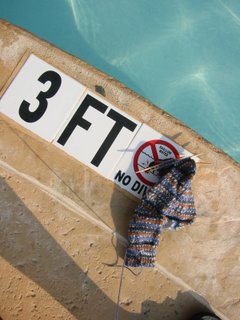 He makes a note to talk with Knitter David.

Feeling like perhaps he does not belong by the pool, Sock heads for the beach to check out some naked feet. Looking at the footprints, he wishes Icarus could be here to appreciate all the bare shoulders. 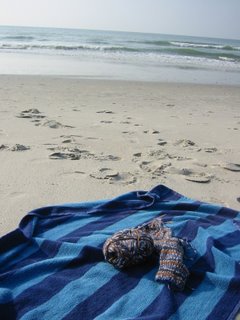 Not wanting to turn red from too much sun, he relaxes under an umbrella. 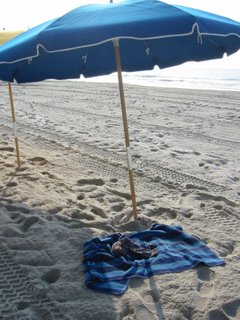 Sock wearily climbs the stairs back to the hotel where he takes an afternoon siesta. 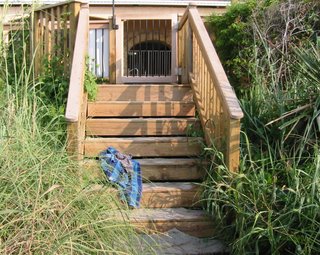 After his nap, Sock relaxes with a good book while Son finishes his nap. 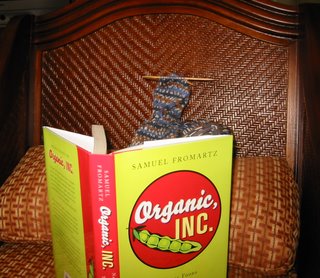 After the boy wakes up and they await the return of Icarus, Sock joins in a raucous game of Twenty-One. 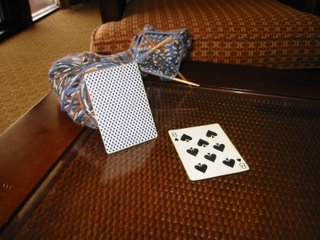 Sock is overjoyed when Icarus comes home with Grandfather! 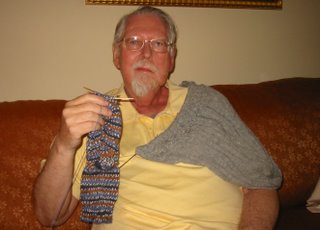 P.S. My deep gratitude goes to David. Not only has he been willing to humor my fiber addiction. Not only has he learned to knit (this is his first sock making its debut in today's adventures). In an effort to entertain the sock y'all as well as amuse me at a time I'm under a lot of stress, he conceived of this post and took the pictures.

BTW, David informs me that it is even more dorky for a middle-aged man to take pictures of an unfinished sock on its touristy adventures than it is for me to do it.... I love you, David--especially your geekiness. Thanks for being here. And thanks for bringing the sock.

i didn't know how dorky i was until my cameo this afternoon. more! more

I got a nice laugh from your post today. Thank you for that!

Hilarious! Lovely to see your dad, too. --Syl

Thank you for the laugh! Tell David and Sock that we are all lucky that 3ft. only refers to the depth of the water. Imagine if we all had to contend with 3rd sock syndrome!

My dad hasn't been well lately either. It is so hard to see a once strong man, so weak and unwell. Hope your dad is feeling better soon.

My daughter also wrote a knitting story. (It's on my blog) I'm off to read your son's. Thanks for the link. :)

I love seeing the adventures of the sock. Really gets around, eh? :) I am intrigued by the _Organics, Inc._ book. Do you recommend it? (does Sock recommend it?)

That sock gets out more than I do. Great post!

This post is really (gasp!) better than the Harlot's when it comes to Sock's Big Adventure. I'm glad Icarus came home with Grandfather. I'm sure Grandfather is glad to be home too. Shawls are wonderful, are they not?

And WAY TO GO to Knitter David for learning. My husband would be a great knitter but his classic line every time I bring it up is that he doesn't need knitting in his head.

So happy together. Looks like fun was had by all. It's always nice to find new ways of entertaining one's WIPs.

Hi! It's great to see your dad looking so well, and holding such dashing knitwear, too.

Too funny! That sock really gets around!
Ang

Wow that socks is busy. Congrats to David for learning to knit.

Very funny! Good job with the sock too.

Here are some links that I believe will be interested