Monday afternoon David and I took my father to the radiologists for his regular appointment and told them how weak he was. They decided to give him intravanous fluids to help his dehydration. After we left their office, we brought Dad back to the hotel. David dropped us off at the entrance while he went to park the car. Dad almost passed out in the elevator. I caught him and basically carried the 200 pound man into our suite. The 10yo girl in the elevator with us was so frightened.

We continued giving him fluids throughout the evening. Last night David was up every two hours feeding my father by tube and watching him for half an hour after he ate. This morning he was so pale and weak that we called 911. Amazingly, the ambulance and the EMTs were already downstairs, creating a map of the newly renovated hotel. They were able to be at the room in seconds. They took him to the hospital where he was admitted with dangerously low hemoglobin and a high BUN, meaning that he was both extremely dehydrated and in need of blood. As we knew, his blood pressure was very low and his pulse extremely high. He was not getting enough oxygen.

After the hospital admitted him, they set him up to get four or five units of blood and planned to scope him this morning to figure out where the bleeding was. He is there now.

When there is a crisis, I knit.

I completed the third chart for Icarus: 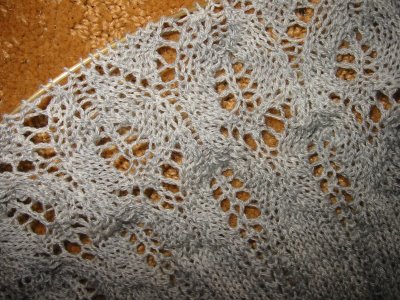 and slipped Pi off the needles onto waste yarn so I can knit the edging without having it all bunched up. Because Pi is a project so connected to my father's illness (See Lace 1, 2, and 3.) I am really glad I decided to do it. It gave me a chance to see it all laid out, and even though it is not blocked, to see a work in progress that seems so much more whole than I had imagined. Suddenly I can see that while there is a lot of very hard work to get through, it is not quite as impossible as I had begun to fear. 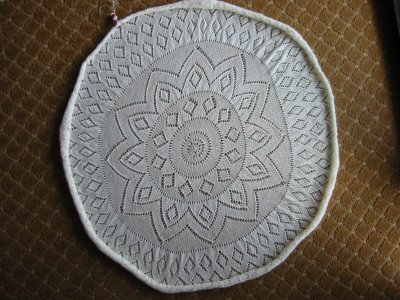 One of the weird things about raising young children is that even when things seem at their worst, life must go on. Sometimes Son is sad and scared, and as parents we feel we must be as calm as possible to make this easier for him to go through. Sometimes Son is precociously aware of my sadness. He drew a picture of me sitting as the spinning wheel with a balloon of my thoughts--a father in a hospital bed. In the picture I looked so absent and drained. But most of the time, Son is still his active funny self, eager to run around, play with words, go swimming in the pool or the ocean, and laugh. At moments, this makes me want to crawl into a hole and abandon my child. But fundamentally I recognize that this is the greatest gift my child gives me.

(By the way, Son wrote a story about knitting on his blog, The Little Giant. Please visit him!)
Posted by Hannah

Wow. This is an incredible post, and incredible knitting. My best wishes to your Dad, as well as to your entire family for the ability to keep on going. Son is a wonderful little child, and I've now subscribed to his blog. He is indeed a gift. Sending strength from Boston...

What a lovely, thoughtful and introspective post. I am so glad your father was able to get care quickly. I'm thinking of him and of you.

What a sad, frightening and draining experience you've had with your dad. Best wishes and good thoughts to you and your family. Pi is gorgeous!!!! I just don't have it in me to do lace knitting and am always impressed when others pull it off so beautifully.

Oh drat. That is a lot of blood. I'm so sorry he's having such a rough time.

One of the greatest gifts you can give your son is letting him see your tangle of grief and love and compassion for your dad. Email me if you have questions about that?

I'm so sorry to hear about your father. I've always found that I turn to knitting when I need to put order to chaos in my life. Sometimes, it seems the work is the only way to put things exactly the way I want them to go. Your lace is phenomenal. I started that pi shawl a few months back but the repeats were off in the Knitters Almanac and ended up frogging and doing a concentric circles pi instead. Would be interested in hearing whether you had any problems with the pattern.

I'm sorry your Dad is so weak in body. I hope he's staying strong in spirit. Sending good thoughts your way.

Such a powerful post, H. I thank you for sharing it with us. I am sending my best wishes for healing to all of your family.

I cried when I read your three lace posts, and this one. I laughed when I read your A Better Day post. I can relate to you so well, having been through cancer surgery with my father a few years ago, and now going through his new health problems and accelerated decline and wondering how much longer we will have the grace of his presence in our life. Your words are beautiful. Thank you so much for sharing your thoughts and feelings with us at this incredibly hard time in your life. I also read your son's blog and loved it. My prayers are with you and your father and family.

Here are some links that I believe will be interested

Hey what a great site keep up the work its excellent.
»