My father, now home from the hospital, called up and sounds terrific. We compared notes on the facial nerve deficits we each have due to our surgeries. Then he told me what PBS documentaries he has been watching during his recovery.

After a few minutes, he changed the topic and asked how my book is going. When Dad started talking academic history, I knew he was back to his old self. After we chatted about my project, there was a pause in the conversation.

“Hey, you know what I just bought with my book advance? A spinning wheel!” said I.

“Wow! That sounds like something you will love. I’ve only met one other American--or basically American--spinner. When I was collecting folk music in Scotland, one of the women who performed for me introduced me to another American folklorist. He was quite famous in the field, but left it eventually.

“Anyway, he was wearing a beautiful fair isle sweater. Your mother, knitting at that moment herself, realized it was handmade and asked him if his wife had knitted it for him. He looked a little embarrassed and said no, he had knitted it himself and that his mother taught him how when he was a young boy.

“The woman who introduced us interrupted and said, ‘Aye, what he’ll not tell ye is that he not only knit it but he sheared the sheep and spun it up! He's a weaver, too!’" My father paused for a moment. "Goodness, what was that man’s name? Ah, yes—Norman Kennedy.”

My father sounded pleased: “You’ve heard of him?” 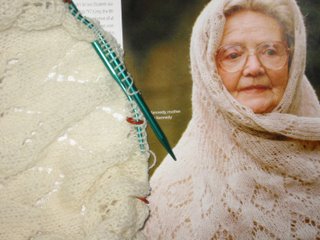 I was flabbergasted. “I can’t believe you brought him up right now. I started knitting a shawl during your surgery. The shawl is modeled in the pattern book by Norman Kennedy’s mother, the one who taught him to knit!”

What an incredible coincidence, more for it to have come up so randomly in conversation than the fact that he knew the model’s son.

This shawl has been about love and connection since the moment I cast on. Clearly, this particular project was meant to be, and the fates are reminding me of that again and again.

What an amazing coincidence. Meant to be, indeed.

Everything truly does happen for a reason. How special it is to discover that reason and be able to wonder at it. You are very lucky.

That is really amazing! What a great story!

It is great news that your father is recovering well!

I saw something that you will be traveling to The Mannings tomorrow? Some of the ladies from my knitting group are going, but I could not make it this time. I hope you all have a wonderful time, and I hope to meet you sometime soon!

I'm so glad to hear Dad is feeling better. My Mom is too - perhaps it's time for things to take a good turn in the cosmos.

and that coincidence - WOW!

This is just a wonderful story of interconnectedness and weaving and knitting and the cloth we are all a part of. What a beautiful thing to have happen --

What a lovely post! I'm glad your father is doing better.

X-treme Coincidence? I have chills!
I bow to your X-treme entry :)

Everything happens for a reason, and clearly you and Pi are meant to be.
-sorry for the cheeseball new-agey stuff, but it seems so appropriate.

Wow- how cool is that?

I love when synchronicities like that happen. Makes me believe that just maybe there is a "higher power" of some sort.

Wonderful story! Sounds like your father is pretty cool too.

Hands down that is the best Xtreme entry. Amazing Lace indeed!

Amazing Lace = Amazing Grace? I love this entry...touching and another of those "meant to be's" that suggest divine intervention!
Delightful!
(((hugs)))

That is just too cool. I love it when the world shows you just how small it really is.

Hi Raven - it's probably a bit out of context now, but I appreciate your story as the syncronicities continue to pile on.

I have just gotten back from my 8th research trip to Ireland and was looking for Internet references to Norman that I could provide to a young 19-year-old who was on my team (studying botany & art in northern Vermont). I thought she'd benefit by meeting and spending time with Norman.

I deeply enjoyed your story as a finish to another two weeks of well-knitted connections "out of the blue" - finding people with keys and keys in wells and 14th century bones inadvertently escaped from tombs and all manner of other synchronistic adventures.

It seems even that I might have met you when I brought Helen Schneyer down to Tacoma Park to sing with Norman for the DC Revels, and stayed at Rickie's with her... but I wouldn't know if you were part of that crowd or not. I played her younger "beau" for the evening to everyone's delight, and as we left early to drive back to Vermont everyone was hooting out suggestive comments which we both enjoyed tremendously. I actually lost a girlfriend at the time, who became convinced in jealousy that Helen was making headway.

Your story is a caution. A sound recording engineer and lifelong singer (I produced Helen's CD) I've since "mysteriously" lost most of the hearing in my left ear, and have periodic vertigo & migraine-like episodes (without pain)... so without distance and other spatial cues (I have been lifelong blind in one eye from a childhood injury) there are sometimes days when I'm extremely reliant on my maple staff.

It's an interesting journey because I once lectured at international AES conferences on spatial localisation, and invented a special ambience recording microphone used primarily for film... but ironically can't hear the effect any more myself.

Please keep up your good writing when you can - I'm impressed with your story (which I've read some of the side notes from) and the continued articulate voice of your experience and research.